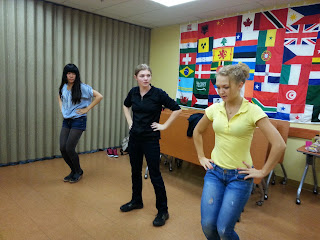 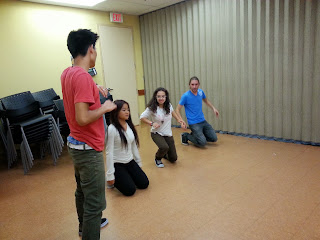 Today’s session was about dancing, but we started the session with a couple of ice-breaker games to get to know one another better.     One of the games was that we had to think of a word which starts with the first letter of our names to describe ourselves. Everyone took turns to say the description, plus the person’s name, and we had to point at the person at the same time. It was so simple that everybody got it quite easily. So we made it harder, by adding a greeting in various different languages. That went pretty well, too.Through the game, I not only remembered everyone’s names, but also I learned how to say “hi” in German, Portuguese, Russian and Karen. I felt like I knew more different languages than before. And others also learned that “Ni Hao” means “hello” in Mandarin!
After we got to know one another better, We started doing stretched movements for warming up. And we split up into two groups with 3-4 people each. Everyone needed to think three different levels of poses, such as high pose, medium pose and low pose. Our task was to make our own dance with those poses. That was hard to act 9mixed poses smoothly and constantly in my 3-person group. And the other 4-person group is even harder as there were 12poses. After a few times of practicing, our two groups showed our dances to each other. I kind of forgot a little but I could follow what my partners were doing, while three of us were doing it together. I thought we did very well.

I thought dancing wasn’t that fun until this session changed my opinion. I came up with a few new definition for dance. Dancing makes you know yourself better while stretching your body. Dancing brings you creative thoughts while making up movements. Dancing helps you develop your teamwork skills, and builds friendship with your partners. Anyway. I like this session!!!