We went to Canada Wonderland on August 9, 2013. Everyone met at Spadina Subway Station. We took the GO Bus after several stops on the subway. Canada’s Wonderland is so far that took us a long time to get there!

Once we arrived, everyone got a map of the amusement park. We planned to first ride on the Leviathan, which looked like Dragon Fire. It seemed like the biggest ride in Wonderland. It kind of freaked me out, but I still wanted to try this ride!

Once we got on, I felt almost like every single cell from the inside of my body was holding its breath! I clenched the handle grip as I felt the chill went up my spine. I was too scared to open my eyes, I even screamed out loud!

Later on, we played Wild Beast. It looked like the supporting structure was made of wood! This was a much scarier ride than I though it was going to be. The ride shook like crazy! I felt aches all through my body, and my heart was throbbing so hard. It might be those two rides twisting my stomach which made me have a stomachache.

The last ride we got on before lunch was called Night Mares, which was pretty fun.

The price of food in there was not economical but it was still okay.

In the afternoon, we chose to ride on the White Water Canyon, which was a gentle ride. It was good, since we just finished eating. Six members in our group fit perfectly in a boat. Maybe I was just lucky, but I sat in the safest spot in the boat, such that I almost didn’t get wet at all! The next ride we went on, was a totally different story. Nobody could be left out of getting downright wet on Timber Wolf Falls! Everyone was soaked through by the end of that ride! In order to air-dry ourselves, we went on another ride, called Wind Seeker. It was the tallest structure in Wonderland, so tall that I could look over the whole amusement park once we were at the top! What a magnificent view!

As there was still some time left. We went on the Psyclone, Swing Of The Century and Behemoth.

Every ride was unexpectedly fun! Hopefully next time I could go there again. Thank you, Kids Up Front, for the opportunity to visit Canada’s Wonderland! 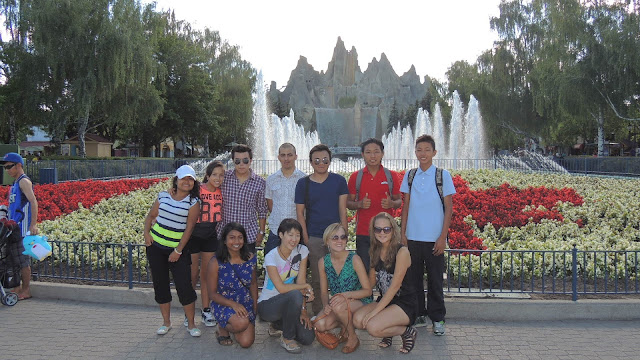